At Skillcrush, I get to watch women change their lives by learning to code every single day. And I get pretty pumped seeing how women use technology to solve problems in whole new ways. Take Bea Arthur, founder and CEO of Pretty Padded Room.

Take it online, of course.

Bea’s Pretty Padded Room is kind of like an online therapist’s office, with other perks thrown in. PPR is an all-female team of therapists who make it possible for you to seek out therapy with a licensed professional without ever walking into a clinic. Plus, clients can get care in a variety of ways, from doing live sessions with therapists to writing back and forth with a trained, licensed, and insured therapist via a digital diary. (I know! So cool!)

I got to chat with Bea, who weighs in on the personal experiences that led her to launch Pretty Padded Room, how she “proposed” to her mentor, and how she deals with uncertainty.

1. Tell us a little bit about yourself:

My name is Bea Arthur and no, my parents are not Golden Girls obsessives—just Africans who didn’t watch much TV. I enjoy brunch, biking, and running my business. Plus, I’m turning 31 in a few weeks and feeling pretty good about it.

2. Tell us the story of Pretty Padded Room.

Pretty Padded Room was actually born out of a personal need following the failure of my first company. I was really depressed and even though I’m a therapist and all of my friends are therapists, I was too embarrassed to ask anyone for help. I realized that if I had this much resistance to reaching out, then that many more people were missing out on a valuable experience because there wasn’t an easily accessible option. So I wanted to make it easier to help people get the support they need when they need it.

3. What did you do before you started Pretty Padded Room, and how did you transition?

I was a domestic violence counselor and that experience actually inspired me to have an all-women team of therapists because I really liked the dynamic of powerful female partnerships. I kept my job for the first full year after I launched PPR. I was really scared to leave before we were profitable, but then I realized it wasn’t ever going to become profitable if I worked on it part-time, so I took the leap. It wasn’t easy and I was broke for a long time, but it needed to happen.

4. What does a typical day in your life look like?

I wish I could say I meditated and made a smoothie every morning, but I almost always wake up and start working right away on my phone. I go to the gym about three times a week, but after that it’s off to the races. Right now, I’m in Y Combinator so it’s very demanding, but the company is growing like crazy this year so I’m grateful for the time to just focus on scaling.

5. Has there ever been a time in your career when you were unsure of the right next step to take? How did you decide what to do?

Several times! That’s why I’m really enjoying my thirties because my twenties were rough. I was always a hard worker but I wasn’t really sure what I wanted to do so I tried out many different careers, and even though I was a little lost, I was still super ambitious so I crashed and burned a lot! I was a personal trainer, I was in real estate, I tried finance, then that business that bombed. It was awful but I kept trying until something felt like a fit. I’m obviously very personally connected to this company so that has kept me going when it was hard to handle startup stress, but I am actually in love with this job which is why it’s the longest one I’ve ever had.

6. Have you ever had to search out a mentor? How did you go about it?

I had a major girl crush on my first mentor and after the first few times we met, I mailed her a card with a Starbucks gift card thanking her for her time and telling her how much her advice meant to me, then I formally asked her if she’d be my mentor and she said yes and we hugged! It was like I was asking her to the prom, but now it’s all much more casual. I’ll ask anyone for advice and if I like their style, I’ll just keep bugging them. It works a lot better now because I buy cocktails instead of coffee.

7. If you could learn one magic skill, what would it be?

Patience! I’m much better than I was a few years ago but I both envy and am mystified by people who are naturally chill.

8. What piece of career advice would you give yourself 5 years ago?

I always tell people that you have to have a short memory and a long vision. In the startup space, there are more lows than there are highs and I used to get really discouraged if things didn’t work out how I’d planned. I’d waste so much time sulking and doubting myself when I had more work to do, so I’d say recognize upfront that it will be hard and uncomfortable then shake it off and keep your eye on the ball.

Bea Arthur:
Called “innovative and inspiring” by the American Counseling Association, licensed therapist and entrepreneur BeaArthur has become a leader in the field of mental health care and telemedicine. With the goal of bringing peace and power to women everywhere, she founded Pretty Padded Room, an elegant platform that is devoted to transforming traditional therapy into a more affordable and approachable experience. The Columbia University alum has worked with a variety of demographics including addicts in recovery, couples in crisis, and survivors of domestic violence. Her passion for self-care led her to start two wellness-based businesses and a thriving private practice all before the age of 30. She has been featured in Elle, MTV, Fast Company, Entrepreneur Magazine, Huffington Post, VentureBeat, NPR, and CNN; and was also named part of the New Guard of women in tech by Marie Claire magazine as well as an entrepreneur to bet on by Newsweek. Arthur is also the first black female CEO from the US to be accepted into the prestigious Y Combinator accelerator program.

Sometimes you need some 1-on-1 with a licensed professional. Q&A: Bea Arthur of Pretty Padded Room http://goo.gl/n5Oe4d via @Skillcrush

Q & A with Bea Arthur: Taking Therapy Off the Couch and Into Your Browser 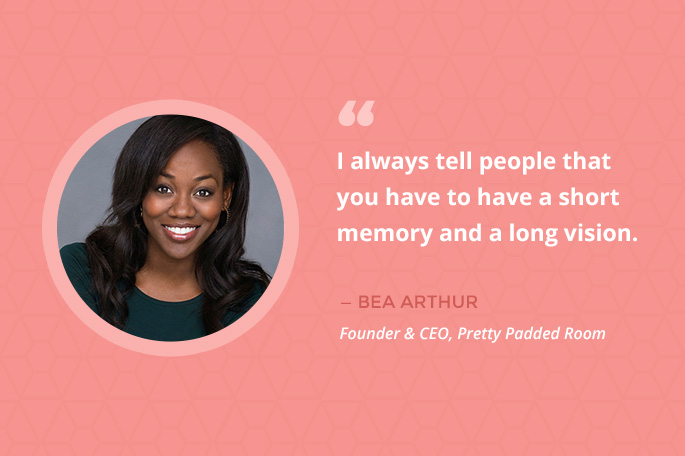