Make a plan for learning the tech skills you need to land a new job with this 60+ page FREE ebook!

As I imagine many women working in tech did, I too suffered a small aneurysm upon hearing about this internal Google memo, “Google’s Ideological Echo Chamber,” written by a bravely anonymous company employee (though now that he’s been fired, he’s been identified as James Damore). The memo alleges that, despite recent investigations into wage discrimination by the company, Google is actually way too nice to women. . .by giving them jobs in the first place.

The reason? “Differences in distributions of traits between men and women may in part explain why we don’t have 50% representation of women in tech and leadership,” Damore says, without citing a single source, in 10 pages of postulating about gender inequality in the tech industry. In other words—our delicate ladybrains can’t handle complex challenges like code.

Skillcrush CEO Adda Birnir appeared on Al Jazeera’s NewsGrid in response to the memo, and pointed out that these biological “gender essentialism” arguments aren’t just wrong, they’re old. They’ve been used liberally throughout human history to justify discrimination. Women can’t serve in combat because periods! Women can’t drive cars, they’re too emotional! Women can’t own property, vote, hold political office, travel without a husband’s permission, marry without a father’s permission, or work in careers beyond nursing and teaching. Why? Because they’re women, obviously!

If Damore had researched his own claims, he would have learned that this old chestnut has been completely and repeatedly disproven, specifically in computer science fields. It’s simply inaccurate, and it undermines whatever valid points he is trying to make. We do need creative solutions to the real problems of gender and racial inequality in the workplace, and Damore might even have a few—but we just can’t hear them over all his unbridled misogyny.

It’s not biology that is threatening to keep women out of tech careers—it is, and always has been, outdated attitudes like this.

In his list of alternative solutions (rather than presumably hiring women and offering diversity training), Damore proposes this: “The male gender role is currently inflexible…. Feminism has made great progress in freeing women from the female gender role, but men are still very much tied to the male gender role. If we, as a society, allow men to be more ‘feminine,’ then the gender gap will shrink, although probably because men will leave tech and leadership for traditionally feminine roles.”

He’s actually (surprisingly) right about one thing: The patriarchal standard that requires men to be competitive and aggressive does hurt men—it hurts everyone. In the workplace culture he describes, anyone else’s success somehow threatens yours. So you work 80-hour weeks to get ahead and take every opportunity to defend your turf by throwing rocks at anyone who could be a threat. Sounds great!

Damore proposes a solution: an end to societal pressure on men to succeed at all costs, but then notes wistfully that such cultural shifts would strip men of their rightly inherited leadership roles as they choose instead more “feminine” pursuits like, presumably, not dying of a heart attack at 45 or seeing their kids grow up. Why is this not a reasonable outcome? Because losing power is what workforce bros are really afraid of.

It’s lonely and stressful at the top. . . .but hey! At least they’re at the top. If men back off and let women flourish in tech or leadership roles, then they’ll lose economic and social power over women—and that idea is utterly terrifying to them. (This idea isn’t limited to men. Other groups in positions of societal power cling to that at the expense of progress. See: white people who do not acknowledge or care about systemic racism.) Men like Damore will have to share their cushy tech jobs and all their perks! They’ll have more competition for promotions and lucrative salaries and leadership positions! They’ll have to pull their own weight on those girly tasks that they’re not genetically equipped for, like “cooperating” or “communicating” or “finding out what the user needs!” Oh, the horror!!!

Damore apparently borrowed the “patriarchy hurts everyone” tagline from a women’s studies textbook to make himself appear egalitarian, but he didn’t think it through. If male aggro-dominance is creating toxic work environments, why doesn’t he see that diversity initiatives in tech and better opportunities for women can foster a better way? Why is he perched at the top of his lonely mountain throwing rocks instead?

James. My dude. You can’t blame “culture” for inflexible male gender roles but then call those roles hardwired and innate to justify your own superiority. (Right? Or can you? Alas! If only I had been biologically gifted with a man’s analytical reasoning skills to figure that out.)

What to Remember About Angry Memos

Look: It’s easy to get discouraged by this latest iteration of sexist bloviating (Humanity’s Favorite Pastime!™). But the good news is that Damore’s screed is not any newer than the arguments it makes, and these types of voices are always loudest in the last throes of defeat. When you’re losing, they don’t write a memo about you; they don’t even see you in the first place.

This particular pot of weak tea is born out of frustration and feelings of impotence rather than some dominant ideology—hence Damore’s original anonymity and his choice to write a 10-page rant with such genius insights as “conservatives tend to be higher in conscientiousness, which is require [sic] for much of the drudgery and maintenance work characteristic of a mature company.” Liberals and conservatives alike, say it with me: WTF?

The truth is that there’s never been a better time for women to learn how to code. Seventy-four percent of high school girls are interested in STEM fields. Programs like Skillcrush and organizations like Women Who Code and Rails Girls are seeing record numbers of enrollment and membership. The smackdown against this disgruntled bigot’s views has been swift and mighty, and it’s come from everywhere: business pros, women in tech, and even former Google employees. Damore’s been sacked for violating company standards of conduct, though he claims he’s exploring legal options at this time. (Lady Justice, may he be represented by a female attorney.) He’s so embarrassingly wrong and obsolete and preposterous that I almost feel sorry for him.

Gender discrimination and disparate numbers of women in tech (especially women of color and other multiply marginalized people) are still challenging. And yet more companies like Google are finding that hiring marginalized groups isn’t just PC snowflake appeasement, but a really, really good idea for the bottom line. Increased diversity is a strategic decision for increased returns, less turnover, more profit with less capital investment, and for improved productivity—and those numbers only become more exaggerated when women are in positions of leadership. Somehow we’ve been able to rise above our chromosomes and transform all that debilitating estrogen into cold hard cash. And we’re not stopping now.

The bottom line is that this memo was a glorified temper tantrum from a guy who worried not about a different path to a more equitable workplace culture, but about his precarious place in the pecking order—which, ironically, he lost entirely. It scares Damore (and all dudebros like him) that people who don’t look like him are succeeding in tech. We’ve found out the secret to earning good money at fulfilling careers that don’t require us to choose between work and the rest of our lives. And we’re good at what we do.

Sorry, dudebros. You can whine all you want, but we’re here to stay.

Make a plan for learning the tech skills you need to land a new job with this 60+ page FREE ebook!

That Google Memo? It’s a Sign We’re Doing Everything Right 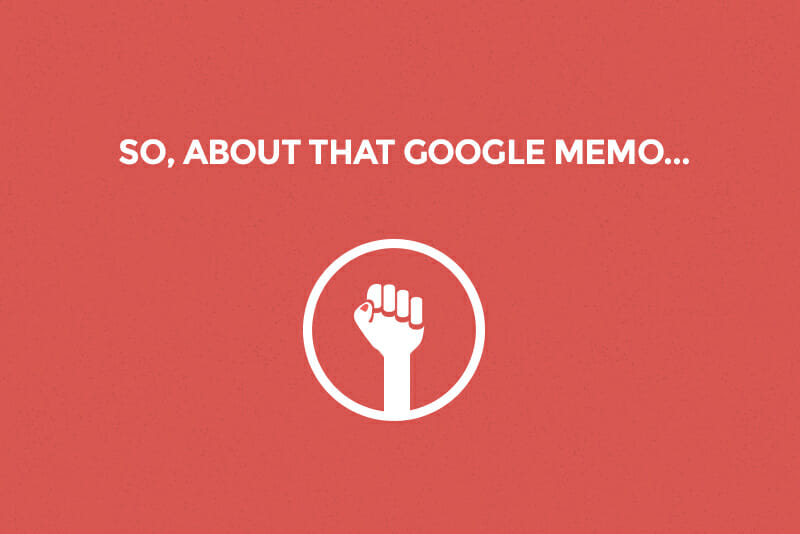